A detailed market study prepared by Learnovate Centre identified the state-of-the-art use of serious games for learning in the corporate sector (Donovan, 2012).  They report an uptake of such gamification and list the following application areas of serious games:

Leadership development applications are not mentioned in the comprehensive survey.

Similarly de Freitas and Routledge (2013) repeatedly write in their review of current literature on how leadership models can be best designed, used and tested in available game environments that “despite the positive literature and study findings, there is still a dearth of evidence of leadership skills training in game environments and the accompanying research, so more research and implementation is required. (page 956)”.

The concept of Flow is highly applicable to various types of interactive learning, playing and gaming as well as serious gaming as recently described by Kaye (2016).

But the interest of Prof. Mihaly Csikszentmihalyi within the context of new learning and gaming technologies shifted to the question of how best to transplant the theory of Flow and the concepts of Flow-based leadership into such a new serious gaming format.

Thus in 2010 Professor Csikszentmihalyi himself became gradually involved in creating FLIGBY, an interactive digital game, aimed at finding ways to best translate the concept of Flow  (learning) into a practical teaching tool (simulation) which also features motivating elements (game). Over the past six years he adopted various roles in the development process of this serious game: from being an initial conceptual adviser, then a co-developer of the draft simulation set-up and commentator on the key quality aspects, and now a promoter as well as a contributor to the regular updates of the game.

The objective was and is to make a significant contribution in the growing importance of “serious games” around the globe in education and training. Thus the aim of this Game is to become a tool that makes the teaching and learning of Flow-compatible leadership values and practices easy, fun, and lastingly memorable.

The newcomers and Pros

The two basic groups targeted are, first, those still young who – owing to their personalities, ambitions, or university education – will most likely hold managerial/leadership positions during their careers; and, second, those with organizational experience already, ranging from small entrepreneurial ventures to large multinational firms.

The first group can be subdivided into two major subgroups:

The second group, those affiliated with organizations, can again be divided into two subgroups. The members of one group are those with human resource management responsibilities, who would like to measure, with reasonable accuracy, the leadership competencies and potential of their key staff. The members of the other group are managers or leaders of units of any size, in any organization, whose productivity needs to be improved through everyone’s more active engagement.

Whatever a person’s interest is in FLIGBY, it should be helpful to highlight the design features of most serious games, which typically can induce Flow state in the learner and game player:

FLIGBY has been designed by experts to be the globe’s top leadership development game; it won the Gold Medal Prize of the International Serious Play Awards in Seattle in 2012. Since then it has been used by 10000+ players in corporate trainings and university courses around the globe.

Illustration 1 summarized the most important Flow generating features of a serious game in which the player of FLIGBY is the recently appointed GM of the “Turul Winery” in California. The player faces the challenging task of having to achieve a state of harmony and cooperation in a team significantly weakened by internal conflicts due to the dysfunctional leadership style of the previous GM.

A key task is to create an environment that promotes teamwork and enhances Flow. Thus, one of the key aims of the Game is to bring as many colleagues as possible – even if just for a short time – into a Flow state. The dilemma is when to be supportive of a colleague and when to protect the interest of the team, the Winery, its stakeholders, and prudent environmental management. At the same time, decisions concerning strategic questions of the future of the company have to be made in accordance with the expectations of the Winery’s owner.

The Game is a 23-scene adventure, each like a little story or a problem to solve within the overall plot. Each time the player earns a “Flow Trophy” or a “Sustainability Badge” (for making an environmentally friendly decision) a signal appears. In addition, the player can continuously monitor progress on various aspects of performance as General Manager. Illustration 2 shows a snapshot of the main user interface. 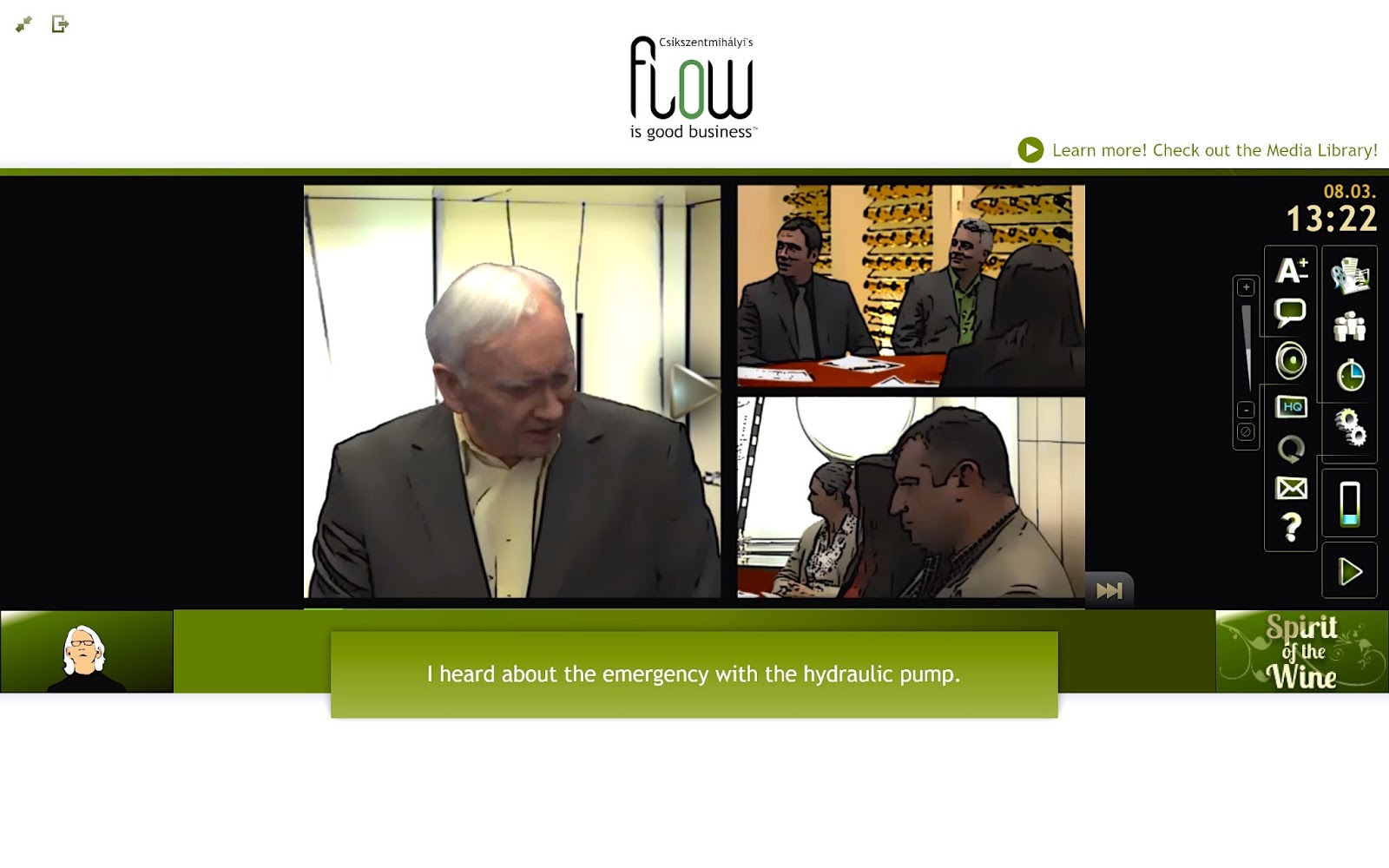 From left to right on illustration 2 we can see: the number of Flow Trophies the player has earned up to this point in the Game. At the center is FLIGBY’s interactive movie screen, each with a subtitle; this shot showing Jan, the GM’s assistant, complaining. On the right is the Game control panel, where the player can set and modify various game functions.

During the Game, the player makes about 150 decisions. In case of most decisions – for example, on how to run a strategy meeting with a team – the player must choose one answer from 2 to 5 options presented. The answers selected will put each player on an own, individual story path. There are many possible paths that result in different outcomes at the end of the Game.

The player will have to balance multiple objectives. Since FLIGBY’s main purpose is to teach Flow-promoting management/leadership skills, it should not come as a surprise that the most important objective is to promote Flow at the Winery. This can be done in two ways:  by making managerial decisions that affect the colleagues so that they can get into a Flow state or by calibrating one’s decisions so as to promote an overall Flow-friendly corporate-atmosphere.

It is also an objective for the Winery to follow business practices friendly to the wider social and ecological environment without eroding its profit potential.

The player’s overall performance as the GM of Turul Winery will be indicated by winning or not the Game’s ultimate prize, the so-called Spirit-of-the-Wine-Award.

Players are motivated by periodically winning two other types of lesser awards: Flow-Trophies (each time the players’ decisions help put a colleague into Flow) and Sustainability-Badges (each time an important decision is made that helps protect the environment).

The average game-time is 7-9 hours.

Being an online simulation Game, FLIGBY is a software system, whose delivery method is ”Software as a Service”. It means access to the software and its functionalities is provided remotely, as a web-based service in the Cloud. The software structure is comprised of the following three major parts:

Illustration 3 shows that at the center we find the FLIGBY database; this powers two separate software applications. One is the Game’s driver (essentially the simulation), which brings up the sequences in each Scene, and operates the user interface. The other application (the MAP) is for generating individual and group reports. It also assists instructors to monitor their players’ progress, on individual as well as group levels.

Producing a serious but fun game for effective learning is an interdisciplinary effort which also necessitates pedagogical skills and understanding of concepts, which we describe in the following section.

Different systems and approaches to measure management and leadership skills

For example, Zenger and Folkman present the 16 most important such management skills base on a dataset in which 332,860 bosses, peers, and subordinates were asked what skills have the greatest impact on a leader’s success in the position the respondents currently hold.

In contrast to this, the developers of FLIGBY used a different approach: Csikszentmihalyi’s global best seller book Good Business: Leadership, Flow, and the Making of Meaning (2003) describes several biographic interviews with successful leaders who created a Flow-inducing work environment at their organizations. The author and a team of management scholars then analyzed the management and leadership skills characteristic of those case study personalities and drew up a list of 29 key skills. Then the team analyzed the 150 game decisions with two objectives:

The resulting individual skills profiles of several hundred players were then validated by involving experienced coaches and management trainers. After the first 2000 players had completed the game, the initial coding of the skills was independently verified by a second expert team. Furthermore, we can report that the subjective feedback from the users themselves has been strongly supportive of the reliability of the measured skills.

Based on the theory of Flow and the observations described by Csikszentmihalyi (2004) there are 4 skills which are particularly important because they might create a work environment favorable to Flow experience. Marer et al. (2015) describe how the 29 skills measured by FLIGBY can be combined with other systematizations of management skills such as the “Executive-Core-Qualifications-system“, the standard for measuring high-level applicants in the US federal administration, or with “Gallup’s-StrengthsFinder“, a globally used such set.